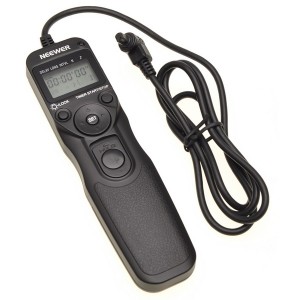 The cold is causing my fingers to go numb and I rush to wrap the exposed copper wire with a bit of black electrical tape.  In the  damp weather I knew it was time to replace my trusty well used Canon TC-80N3 Intervalometer. Returning home I was shopping online for a replacment when my eye caught a much less expensive, and just as capable intervalometer by Neewer, at one fifth the cost, it seemed to good to be true.

The Neewer intervalometer is a direct competitor with the Canon TC-80N3.  At a price of $19.99 on Amazon, the cost difference from the $129 TC-80N3 initially left me a bit skeptical, but I thought it would be worth a try.

The Neewer offers the same features as the TC-80N3.  It is capable of:

The Neewer is also a wired release.  It is not dependant on a smartphone or other transmitter.  If you are looking for a wireless release look elsewhere.

The button layout on the Neewer is  more logical than the Canon. The nicest touch is the fact that the timer start/stop button is  larger and easier to press.  Even in a pair of light gloves I have had no trouble changing the settings.  This is a much different experience than having to strip off gloves and use the corner of my nail to press the start/stop button on the Canon model.

The navigation buttons are laid out similar to a videogame controller with a directional pad.  For switching through the menus and changing the values for intervals or number of images for use in time-lapse photography this control layout feels natural.

The control face is clear for those using the intervalometer features.  Above the LCD display indicators are clearly labled, Delay, Long, Interval and N (for number of shots).  The lables make it quick and easy to remember how to setup a timelapse even if its been a while since you last used it.

My only gripe with the Neewer is the tactile response of the shutter release button when trying to engage the autofocus.  A half shutter press to focus is tricky and it takes some practice.  That may come as a big turn-off to some.  For the price I found it worth the extra practice to get used to the very sensitive sweet spot to engage the autofocus, rather than pay for a $129 Canon unit.

The EZa-C3 uses two AAA batteries. In the case that my batteries were to die on the road I know I’ll be able to pick up a few spares at any gas station.  To me this gives me piece of mind as compared to the Canon intervalometer. While in the several years I was using the TC-80N3 the watch battery never failed, I had an fear that it would while I was somewhere remote. The battery life is great. I’ve had my Neewer unit for over 2 years and I have yet to replace the first set of batteries.

Good Value For The Money

is hard not to like (full disclosure, affiliate link).  Being in the field and knowing that if my shutter release gets wet or trashed no longer bothers me.  In the worst case scenario I am a few short clicks on Amazon away from a replacement. The unit functions as promised and works overall just as well as the Canon unit but at a fraction of the price.

I’ve been using my Neewer unit for over a year now.  If for some reason it should break due to my own negligence I would definately get another.

This entry was posted in Equipment Review.