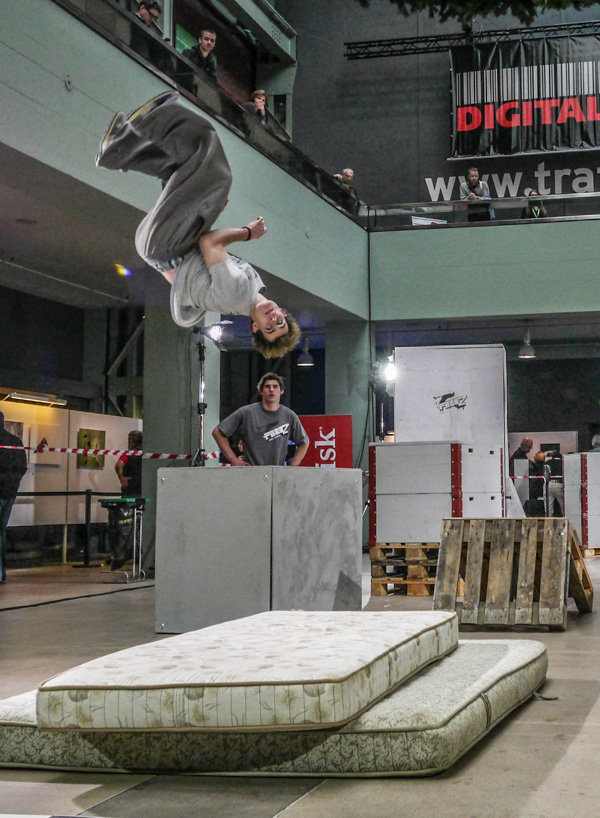 I had a chance to recently shoot a Panasonic Lumix DMC-GH3 at a digital photography exposition as part of a workshop. The days events were focus on sports and action photography and as part of the day I had the opportunity to take the Lumix through a series of test shoots photographing a freerunning club. If you don’t know what freerunning is you are surely missing some great Youtube videos, give it a search someday.

Back to the camera. This was the first micro four thirds system that I had the chance to shoot. In the hands if felt small compared to my Canon 5D. Even being small, it was still sufficiently large to handle comfortably in my hands. I guess it is worth nothing I usually were small or medium gloves so I don’t have big hands. The lenses themselves were also smaller, but felt well built. I had a chance to shoot the 35-100mm as well as the wide angle 7-14mm lens. Given the environment I was in the wide angle was where I spent most of my time. The zoom on both lenses felt good to the touch and had the right amount of resistance.
As I was in an action environment burst rates were important. The specs on the camera advertise up to 20 fps. That sounds more like a marketing gimmick to me. As I was shooting Large jpegs at the time the burst rate felt a little slow compared to my Canon 5D Mk III. Checking out the Panasonic website it sounds like I could have expected abotu 2 fps with large jpegs and that sounds about right.

Using the AFF autofocus mode the focus was quick and seemed to lock fairly well in the dynamic environment I was in. Some the images I had taken did appear a little soft but I am not sure if that is due to focus or the cameras processing of the images into jpeg format. I’d need some more time with the camera to tell.

I was shooting at ISO 800 at f4 for most of the event. It was was a dark environment and in the final images while there didn’t seem to be lots of noise there were quite a few jpeg artifacts that I could have done without. Not sure if that was related to the low light, high speed environment.

The camera was fun, the event was fun, but for me, I think a full sized DSLR is what I prefer for shooting sports.  For a Camera that is currently selling for around 900 USD on special Christmas cash back offers my feeling is you get a decent camera for the price.  However, its performance was not compelling enough to be on my list.  This camera sits somewhere between a high end prosumer point and shoot like the Canon GX1 and a full sized DSLR body and for me I don’t really need a camera in that space.

This entry was posted in Equipment Review and tagged Lumix, photography, review.